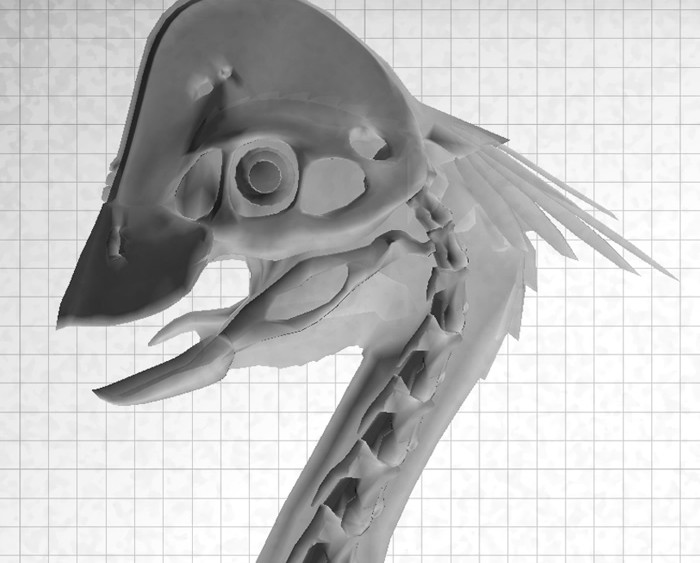 This project began by simply borrowing the fossil cast of an Oviraptor toe claw back in 2004 from CMNH paleontologist Matt Lamanna. Since then that single little bone has spawned many awesome projects for us, including the “A-Ha” moment that allowed us to develop the unique fabrication anatomy for the DARPA ARM robot.

Over the years we meticulously measured and restored the entire skeleton of this unique animal, bone by bone, and now have a computer model that is more complete than the specimen in the collection. Brad Livezy of CMNH, an expert on Bird Myology, guided us in restoring the dinosaurs ribcage and furcula(wishbone), and helped us to properly arrange the skeleton. We could then flesh out the animal, animate it, and even import it into a modern Video Game engine, which led us to our first official project: The Oviraptour, a virtual exhibit projected on 5 screens spanning 72 feet that explored the Oviraptor family and the Bird-Dinosaur connection overall. The project launched aside the opening of Dinosaurs in Their Time, an extensive 37M reconstruction of the Carnegie’s Dinosaur Hall, with great success. We also helped out with the new hall, by measuring every dinosaur in it and providing the exhibit planners with accurate pose-able scale models used to lay out and plan the enormous project… but thats another story, for now, heres a few pics from the Oviraptour and its development.